Note: this is a draft section of a larger guide.  Comments welcome.

What is reasoning? Everyone has an intuitive sense, though many would struggle if asked to define it.

A dictionary is usually a good starting point. Merriam-Webster defines reasoning as the process of thinking about something in a logical way in order to form a conclusion or judgment.

This is OK as far as it goes, but we need to expand and sharpen it quite a bit.  To do this, let’s look at some simple examples.

Reasoning as a mental activity

Suppose Daniel, someone you know and trust, tells you that a person he knows, Marie, is married.  You now know Marie is in fact married.  Put differently, you are now confident that the claim Marie is married is true.

Now Daniel asks: does Marie have a husband? Think about that before reading on.

If you’re like most people, you would have quickly thought something like Of course Marie has a husband – she’s married! But then you may well have reflected a bit more.  Why would Daniel ask about this, if the answer is so obvious?  What’s the trick?

The “trick,” of course, is that Marie could be married to a woman, and so have a wife.  Marie might be lesbian and live in a state allowing same-sex marriage.  Or Marie might in fact be a straight man.  Marie’s being married doesn’t prove she has a husband – though she probably does.

Your thinking here involved considering various ideas – Marie’s being married, Marie’s being a lesbian, Marie’s being a man, and perhaps others – and arriving at a judgement about Marie’s having a husband.  This is reasoning in the Merriam-Webster sense.

In slightly technical terminology, we say that you considered various claims, and also your confidence in the truth of these claims:

and, given the logical relationships among these claims, you arrived at a level of confidence in another claim:

So in this sense, reasoning is a mental activity; it is:

However this is not the full story.

Reasoning is also the network of claims

Sometimes the word “reasoning” is used to refer not to the mental activity but to the claims themselves.

For example here are the various claims in the above example, with a few extra words (but, and, so) used to indicate logical relationships among them:

This is the sense of “reasoning” we are using when we say things like Show me your reasoning! or The reasoning in the article is flawed.

Reasoning can be presented in prose, or in a diagram

A network of logically related claims is an abstract thing.  We always need some way to show or present the network, so that our minds can see and follow it.

The standard way to do this is to express the claims in prose (writing or speech).  Examples abound; just look at the opinion page of any newspaper.  Here’s an example of some reasoning expressed in standard prose:

It’s not set out rigidly as in the list for the Marie example above, but it is still expressing logically related claims, aimed at getting you to agree that not all religions deserve equal respect.  (Plus, it’s more fun to read.)

Representing reasoning in text is so common, and so normal, that most people hardly even realise that that is what they are doing.  There is however an alternative.  We can represent a network of claims diagrammatically.

Here’s a diagram for the religion example:

Note that arrows are used instead of the words like but, and and so in the Marie example; and the claims are arranged left to right in a logical order, though one quite different to the order in which they appeared in the original text.

There are lots of different ways to diagram reasoning, depending on what conventions you choose to adopt.  The diagram above is very minimalist.  In this course, we’ll be using a few different types of diagramming.

To understand somebody’s reasoning, we must model it.

As mentioned, people almost always present reasoning in ordinary prose.  Consequently, we (the readers) have to interpret the prose in order to understand what their reasoning is.  Sometimes this is simple and effortless.  Other times, it is very difficult.  Often it is not at all obvious exactly what the reasoning is, and we have to make our best guess.

In this course, such “guesses” or interpretations are called models of reasoning.  The diagram above presents a model of the reasoning in the religion text.

Coming up with this model required:

Now, you may not agree with the model expressed in the diagram.  You may think that the author’s reasoning was different.  You might be right; but that would just highlight that you are coming up with your own model of the reasoning, and that coming up with such models is what we always have to do when we read or listen to prose presentations.

An argument map displays a model of reasoning

In practice, a reasoning model is usually displayed diagrammatically.  In the graphic above, the middle representation, the list of claims and their relationships, was included for a couple of reasons.  First, it emphasises the point that reasoning (in one sense) is a set of claims with logical relationships.  Second, it makes visually clear that the same reasoning can be expressed in prose or displayed in a diagram.

A diagram displaying a model of the reasoning expressed in a text is called an argument map. 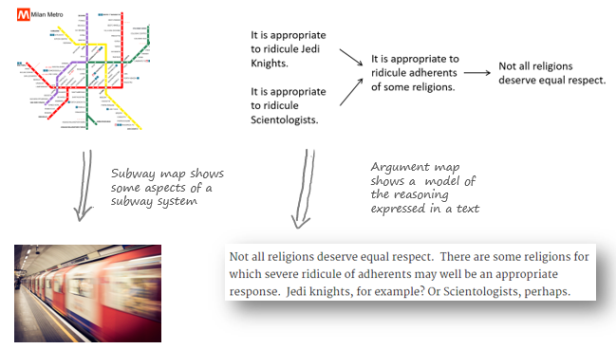 We’ve just covered a fair bit of theory, so here is a brief recap.  We defined reasoning as

Reasoning in the second sense must always be expressed or displayed in some way so that we can see what it is and apply our reasoning capacities to it.  Almost always, reasoning is laid out in prose (speech or writing).  However it is also possible to present reasoning diagrammatically.  A diagram will usually be much better than prose in specifying exactly what the reasoning is.

Often, it is not easy to identify the reasoning somebody has expressed in prose.  We need to make our best guess as to what that reasoning is; in other words, we need to come up with a model of the reasoning. An argument map is a diagram displaying such a model.

2 thoughts on “Understanding what reasoning is”