Well-known anti-theist Sam Harris has posted an interesting challenge on his blog.  He writes:

So I would like to issue a public challenge. Anyone who believes that my case for a scientific understanding of morality is mistaken is invited to prove it in under 1,000 words. (You must address the central argument of the book—not peripheral issues.) The best response will be published on this website, and its author will receive $2,000. If any essay actually persuades me, however, its author will receive $20,000,* and I will publicly recant my view.

In the previous post on this blog, Seven Habits of Highly Critical Thinkers, habit #3 was Chase Challenges.  If nothing else, Harris’ post is a remarkable illustration of this habit.

The quality of his case is of course quite another matter.

I missed the deadline for submission, and I haven’t read the book, and don’t intend to, though it seems interesting enough. So I will just make a quick observation about the quality of Harris’ argument as formulated.

In a nutshell, simple application of argument mapping techniques quickly and easily show that Harris’ argument, as stated by Harris himself on the challenge blog page, is a gross non-sequitur, requiring, at a minimum, multiple additional premises to bridge the gap between his premises and his conclusions.  In that sense, his argument as stated is easily shown to be seriously flawed.

Here is how Harris presents his argument:

1. You have said that these essays must attack the “central argument” of your book. What do you consider that to be?
Here it is: Morality and values depend on the existence of conscious minds—and specifically on the fact that such minds can experience various forms of well-being and suffering in this universe. Conscious minds and their states are natural phenomena, fully constrained by the laws of the universe (whatever these turn out to be in the end). Therefore, questions of morality and values must have right and wrong answers that fall within the purview of science (in principle, if not in practice). Consequently, some people and cultures will be right (to a greater or lesser degree), and some will be wrong, with respect to what they deem important in life.

This formulation is short and clear enough that creating a first-pass argument map in Rationale is scarcely more than drag and drop:

Now, as explained in the second of the argument mapping tutorials, there are some basic, semi-formal constraints on the adequacy of an argument as presented in an argument map.

Second, the Rabbit Rule’s sister, the “Holding Hands Rule,” decrees that any significant word or phrase appearing in one of the premises must appear either in the contention, or in another premise.

Consider then the basic argument consisting of Contention 1 and the premises beneath it.   It is obvious on casual inspection that much – indeed most – of what appears in Contention 1 does not appear in the premises.  Consider for example the word “purview”, or the phrase “falls within the purview of science”.  These do not appear in the premises as stated. What does appear in Premise 2 is “natural phenomena, fully constrained by the laws of the universe”.  But as would be obvious to any philosopher, there’s a big conceptual difference between these.

What Harris’ argument needs, at a very minimum, is another premise.  My guess is that it is something like “Anything fully constrained by the laws of the universe falls within the purview of science.”   But two points.  First, this suggested premise obviously needs (a) explication, and (b) substantiation.  In other words, Harris would need to argue for it, not assume it. Second, it may not be the Harris’ preferred way of filling gaps (one of them, at least) between his premises and his conclusion.  Maybe he’d come up with a different formulation of the bridging premise.  Maybe he addresses this in his book.

It would be tedious to list and discuss the numerous Rabbit and Holding Hands violations present in the two basic arguments making up Harris’ two-step “proof”.   Suffice to say, that if both Rabbit Rule and Holding Hands Rule violations are called “rabbits” (we also use the term “danglers”), then his argument looks a lot like the famous photo of a rabbit plague in the Australian outback: 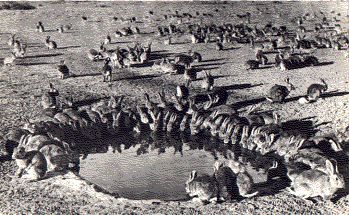 Broadly speaking, fixing these problems would require quite a bit of work:

Pointing this out doesn’t prove that his main contentions are false.  (For what little it is worth, I am quite attracted to them.)  Nor does it establish that there is not a solid argument somewhere in the vicinity of what Harris gave us. It doesn’t show that Harris’ case (whatever it is) for a scientific understanding of morality is mistaken.  What it does show is that his own “flagship” succinct presentation of his argument (a) is sloppily formulated, and (b) as stated, clearly doesn’t establish its contentions.   In short, as stated, it fails.  Argument mapping reveals this very quickly.

Perhaps this is why, in part, there is so much argy bargy about Harris’ argument.

Final comment: normally I would not be so picky about how somebody formulated what may be an important argument.  However in this case the author was pleading for criticism.